This saturday our team is present at the annual event "Lange Nacht der Computerspiele" at the HTWK Leipzig. We will be accompanied by the team HULKs from Hamburg and plan to have friendly matches throughout the day. The event will start 14:00 local time and will go on until after midnight. It will be a great day, so make sure to visit us!

The last match of this year's Iran Open was held between the HULKs and us.

In an intense and exceptionally competitive match, we managed to score a 4:0 against the Kickers from Hamburg. 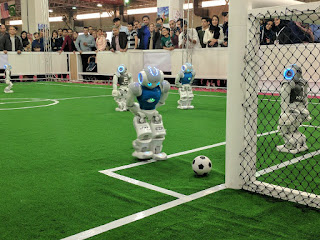 Our robots had to tackle some difficulties like super loud commentator speakers and delocalization. Our hearts even skipped a beat when one of our robots was about to score an own goal - which luckily got prevented by our defense. 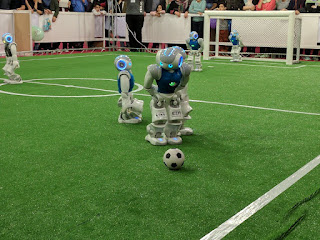 Aftererwards, we got awarded the first place in this year's competition during an extravagant award ceremony. The day then closed with a dinner on the SPL field together with the whole SPL league. 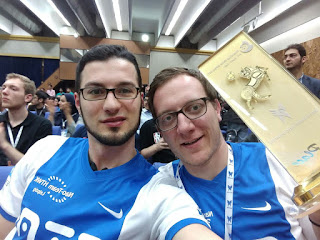 We will use the remaining days in Iran to explore vast culture of this country. 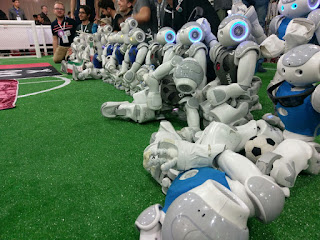 Since yesterday morning, we had our first three matches in this year's Iran Open competition.

Our first opponent was the dutch Nao Team against whom we scored 6:0. 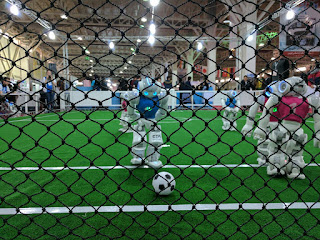 In the afternoon, our second match against MRL closed with a score of 3:0 after a tough match with several technical difficulties. 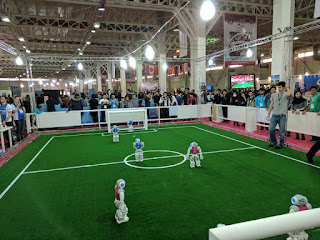 Our third match just finished half an hour ago. Against Iran's second SPL Team 'SRC' we managed to achieve a score of 5:0.

Just see the smiles on our faces: 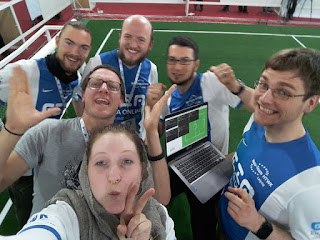 To compensate for the delay of our posts, we took a photo of our newest team member 'Franni' in a traditional Iranian Hijab among our robots. 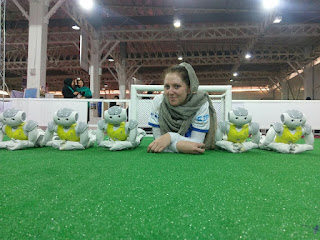 
The journey to this year's Iran Open competition started somewhat different than anticipated. 7 hours before departure, our team leader Rico noticed he had forgotten his passport in Munich. He stayed in Leipzig at that time and the team was just about to leave to Berlin for their flight to Tehran.

And so the challenge began. One car, two people and one passport against the time.

We managed to find a courier who would pick up Rico's passport in Munich at 11:00 AM and drive all the way up to Berlin Schönefeld Airport by 4:40 PM.

After an intense drive involving several congestions and ignoring any speed limits, the courier managed to arrive in time at 4:40 PM. 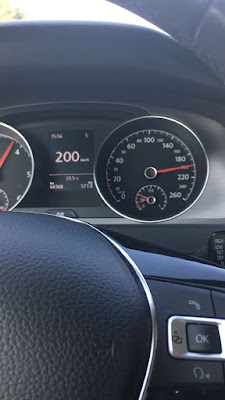 Initially, our flight was supposed to depart at 4:55 PM. Fortunately, it got delayed until 5:25 PM so the very kind lady at the check-in told us Rico would have to show up at the counter with his passport by 4:40 PM.

And he made it!

Just look at the smile on his face:
  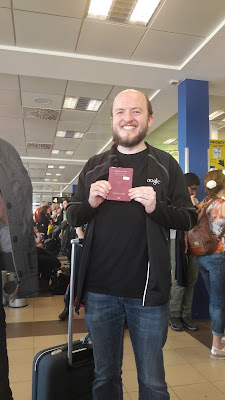 Ok, he is still a bit exhausted. But deep inside he definitely felt relieved.

Long story short: never forget your passport. But as the old German saying goes: What you don't have in your head, you've got it in your legs. (or wheels, respectively)
um 07:28 No comments: