The videos from the final match are now also online. Especially the first half is worth watching.

We lost the finals 1:4 against B-Human from Bremen. After a completely even first half we went into the break with a 1:1 score.
Without changing anything our bots played a lot worse during 2nd half, resulting in a one-sided game after all. Congratulations to B-Human, who proved to be really strong and solid once again. 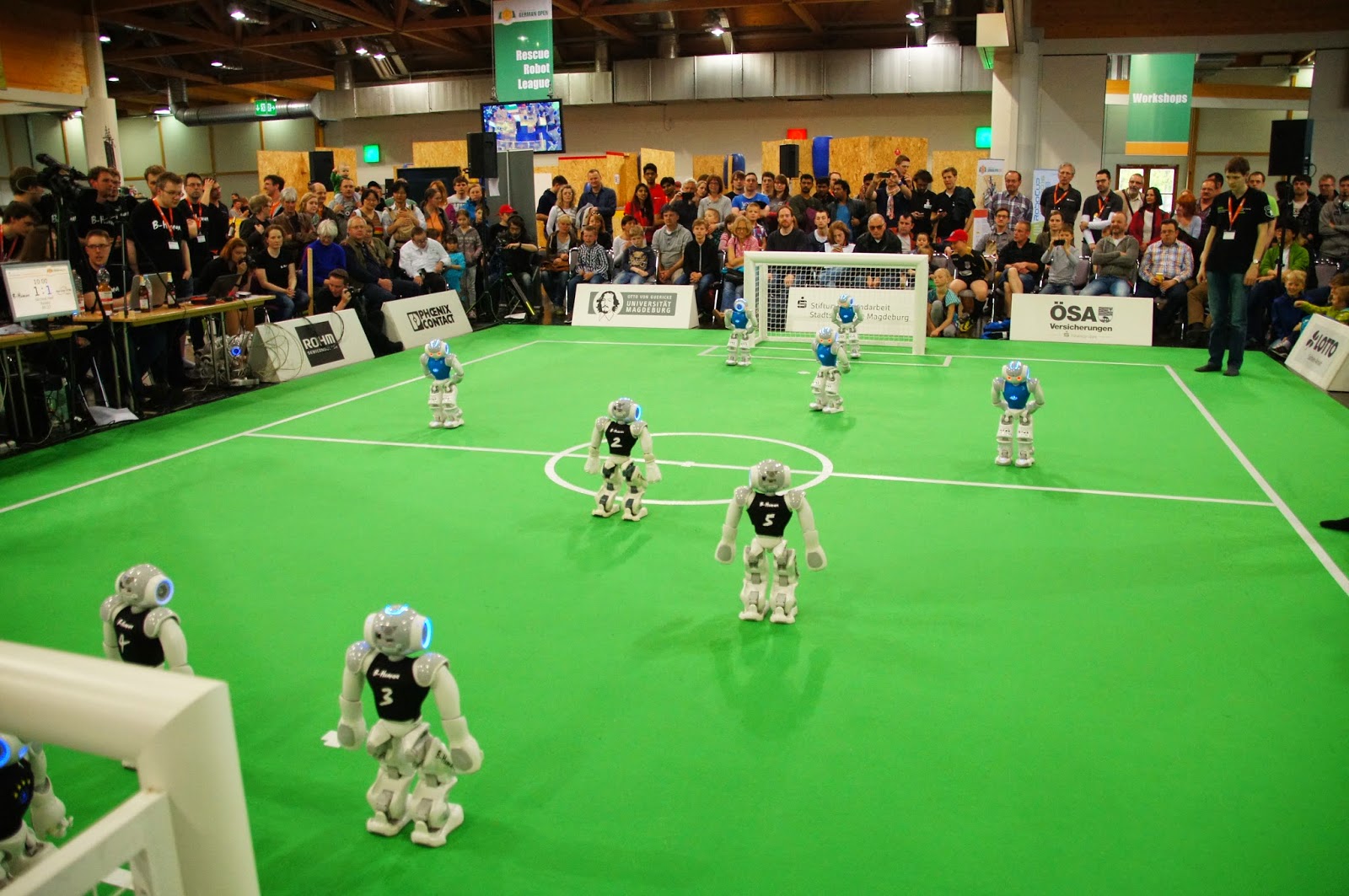 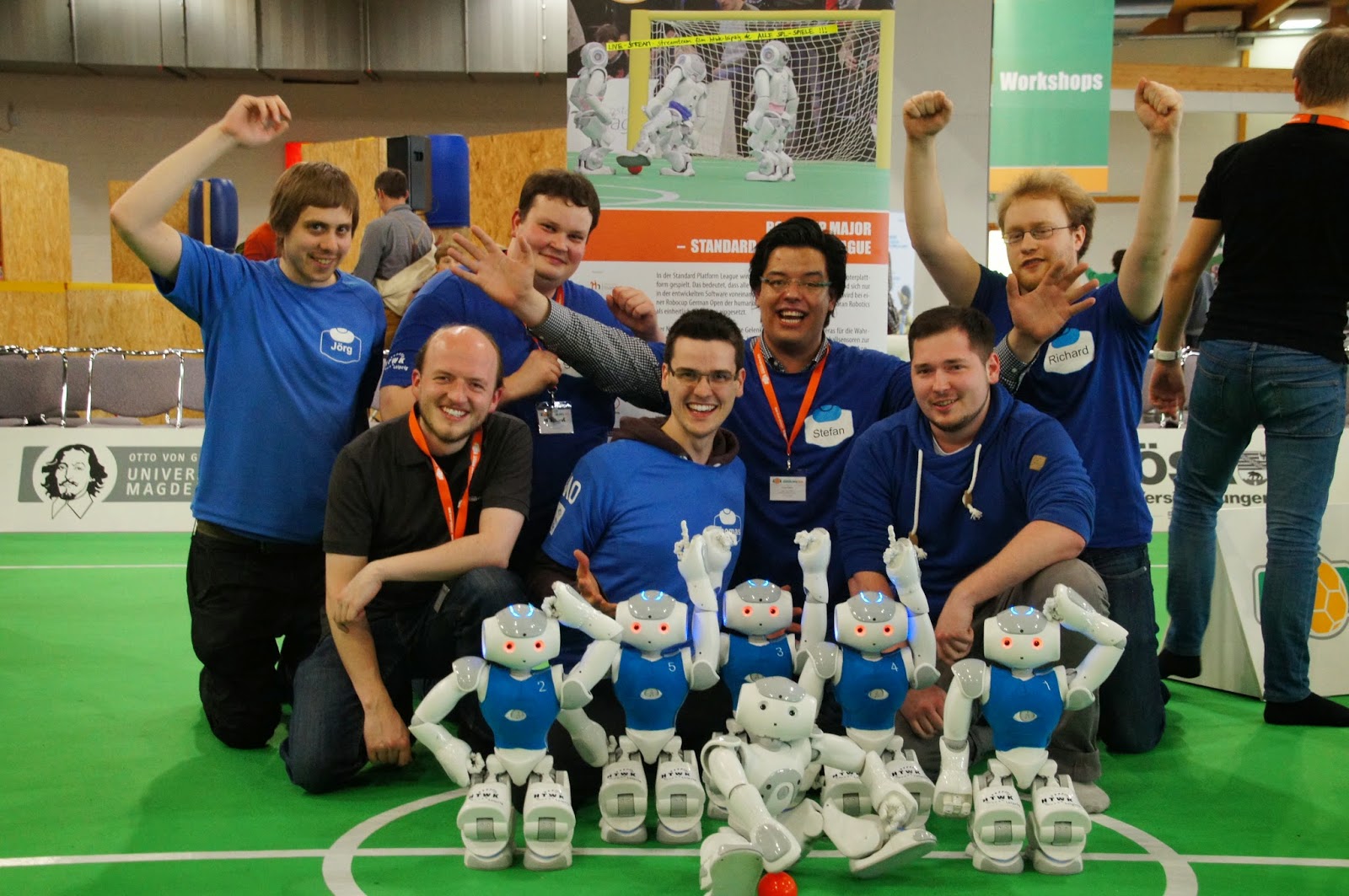 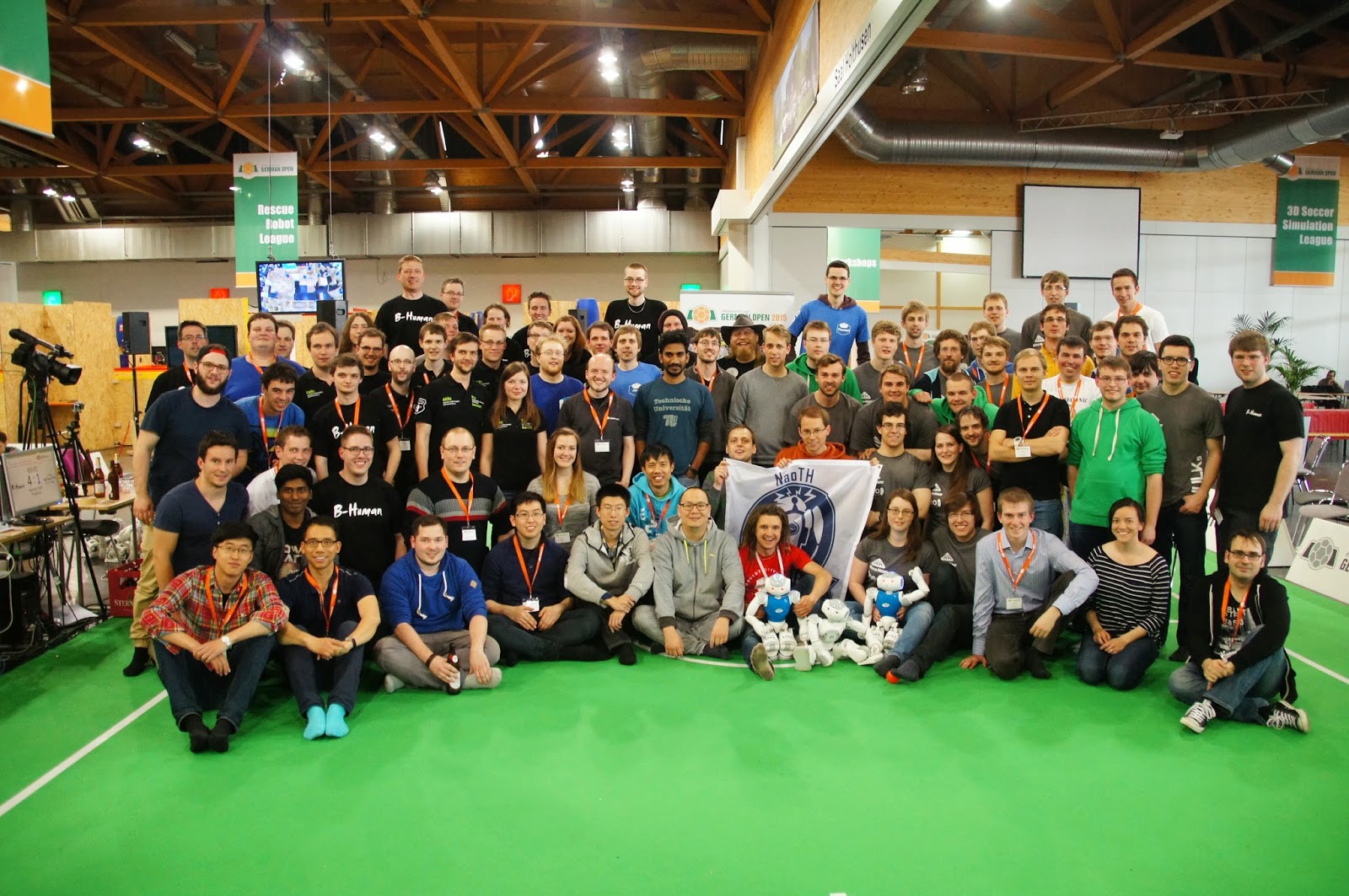 Thx again to everyone who followed us, we will be back for the next event!
um 16:11 2 comments:

Once again we reached the finals of the German Open, trying to dethrone B-Human for the third time in 3 years now. The semi-finals against Nao-Devils from Dortmund started with a blast, as our midfielder passed the ball to the striker, who then proceeded to kick it into the goal. This took only 29 seconds, a new record for us.
The first half was completely one-sided overall, ending with a 5:0 score in our favor. However, due to different rules for playoff games the playtime is a bit longer.

For 2nd half we made some changes in our strategy. In theory it shouldn't have changed a lot for this game, we encountered a serious problem. Immediately after kickoff our striker decided to switch sides which caused the other robots to mostly do nothing of relevance. It took us over 5 minutes to score again. Nonetheless, we are more than happy with the outcome, as we didn't expect anything close to our 7:0 victory.

In a few moments the semi-final between B-Human and Berlin United will open the playoffs for this tournament. We will gladly welcome you on our stream.

Earlier today, the remaining Drop-In games were held, resulting in a 2nd place overall for our team. Sadly we had a major bug in the penultimate round, resulting in a poor placement. In the last game we came back and scored all goals in a 4:0 victory.

During the German Open in Magdeburg a part of our team stayed in Leipzig to present the Naos. There was the nineth "Long night of computer games" and the information day of the HTWK. Among other things we showed the live stream of the German Open. A lot of people watched the games and got excited about every single goal for our Nao team. Moreover the visitors had the posibility to control a Nao. We started a competition where we stopped the time to get a goal. The lowest time was 20 seconds. From 9am to 2am it was a long but very nice time. See you next year at the "Long night of computer games". Good night.

Thanks to the great stream-team, we were already able to upload the videos from our match against Berlin United.

After a thrilling match against Berlin United we move on the the semi finals against the 2nd placed team of group A, which will either be B-Human or Nao-Devils.

We were a bit nervous prior to the match, but calmed a bit when we scored 2 goals during the first 5 minutes, which forced Berlin United to take a timeout to fix some stuff. This improved things a lot for them and we went into the halftime break with a 2:0. During 2nd half the ball was in our half most of the time, but nonetheless we managed to score twice again, with the final goal happening seconds before game finish.

The 2nd day of the German Open is in progress and at 13:15 CEST we will play for first place in our group against Berlin United. Due to them having scored one goal less in their 2 matches a tie will suffice to finish first.

After struggling to compile our software moments before our match against Z-Knipsers from Zürich, we were worried about the outcome. However, despite facing several more issues, we managed to emerge victorious again. Unfortunately we weren't able to use some improvements we added throughout the day.

DAInamite from Berlin and Frankfurts Bembelbots will close out the day. Drop-In games tomorrow will start again at 9 CEST. Our last round robin match will be against the strong looking team Berlin United at 13:15 CEST.
um 17:14 No comments:

We are happy to announce a 6:0 victory over team HULKS from Hamburg in the opening match of the round robin stage.
Our next task will be to adapt our shooting, as our striker missed the opponent goal too often. HULKS goalkeeper also did a good job and prevented our offense from scoring more often.

As you might have noticed, we also have new jerseys. They have been sewn by our member Eike and look fantastic when worn by a Nao.
um 11:07 No comments: 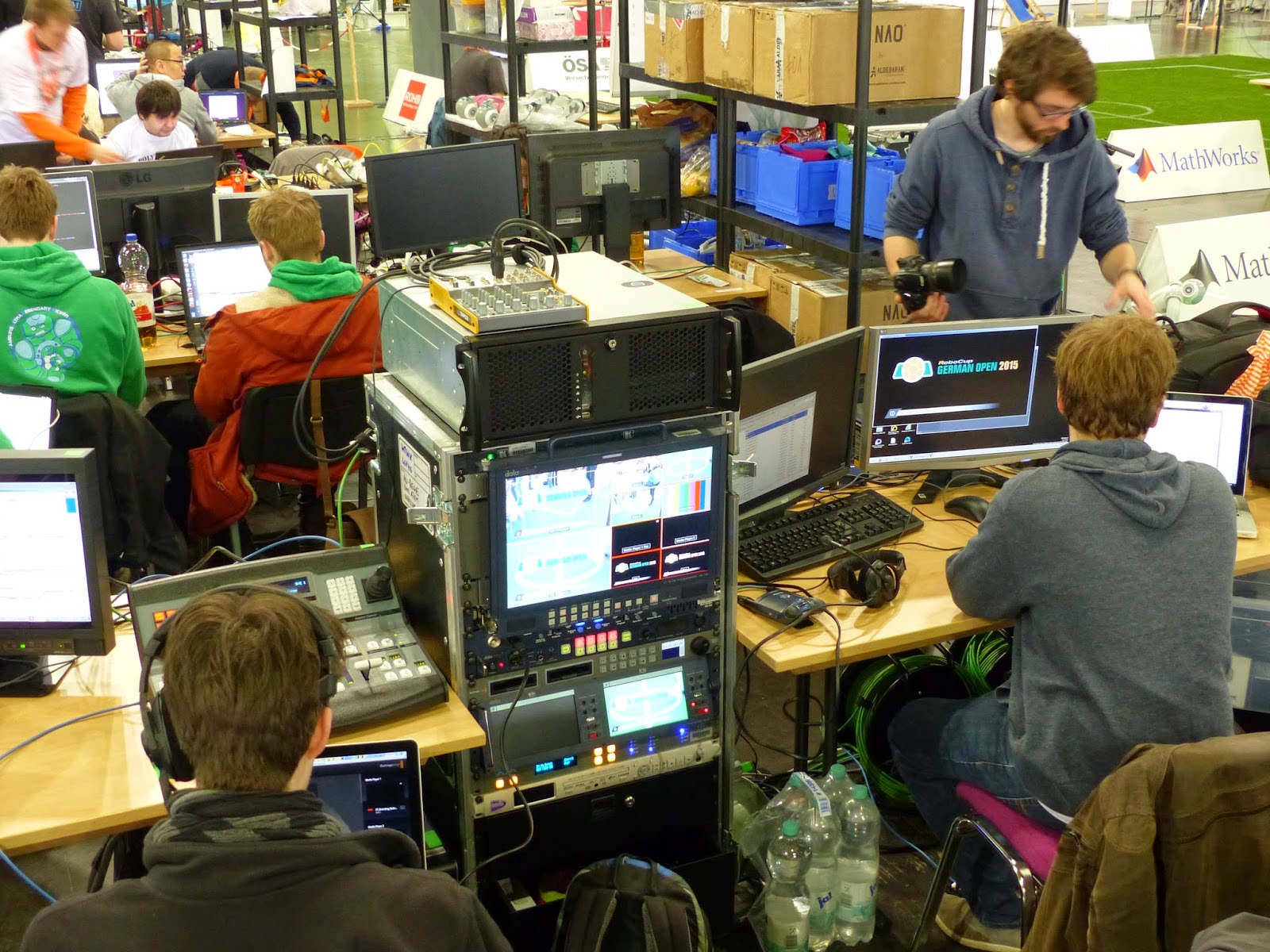 For the complete Schedule and list of results, please see http://www.informatik.uni-bremen.de/spl/bin/view/Website/GermanOpenResults2015
um 08:45 No comments:

To finish up the day we arranged a test game together with the Nao-Devils. This occasion was used to check our new whistle recognition. Detecting the referees whistle is a new challenge this year designed to move our robotics competition closer to human football. 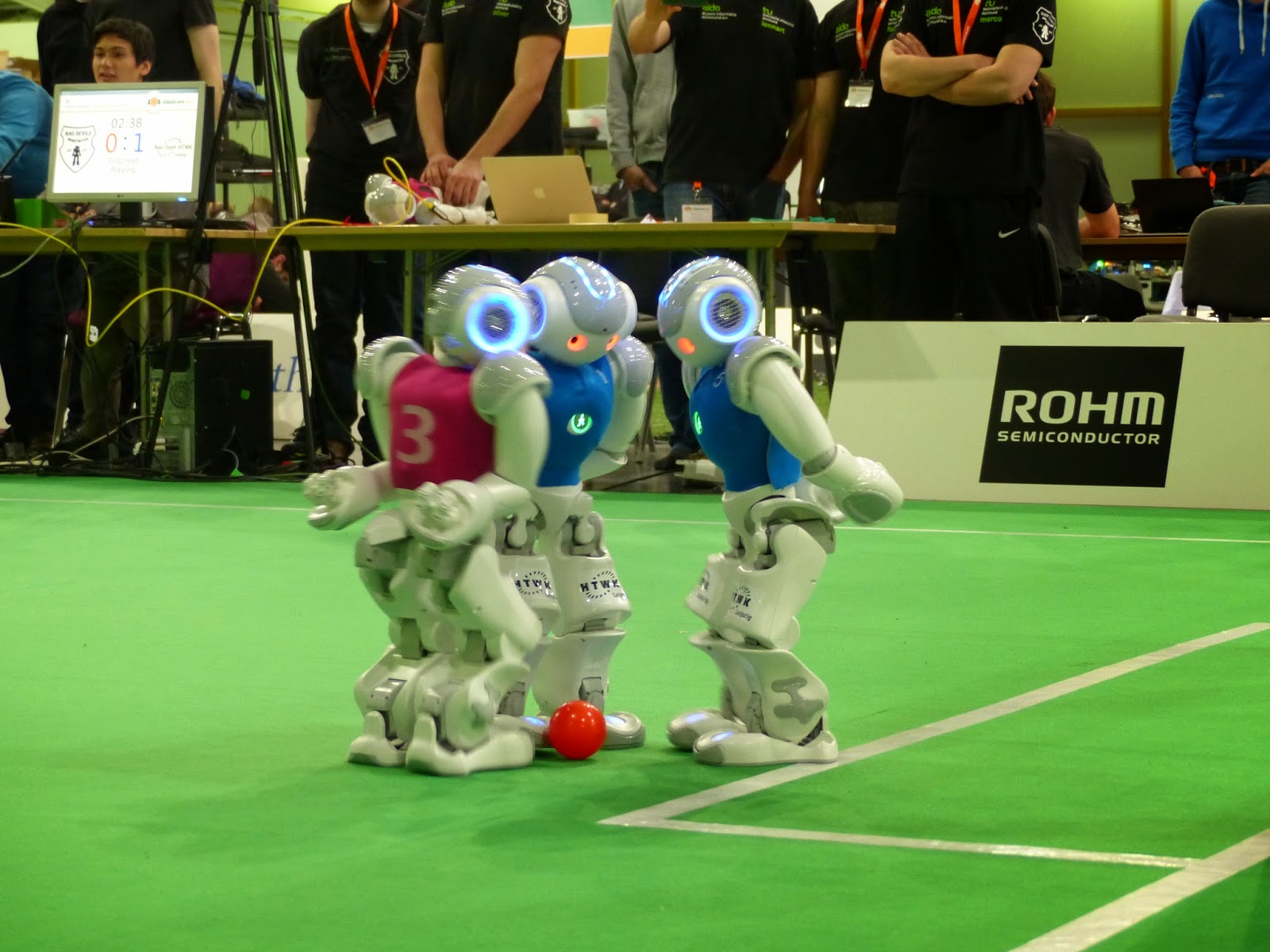 As usual test games are ended early when both teams have seen enough gameplay situations. The scoreboard was displaying a 2:0 lead for us at the end. Thus we are looking forward for tomorrow when the first regular games are scheduled.

The setup stage of the current German Open are over, as the hall will close in a few minutes. So far we are very happy with our progress and are confident to fix some minor problems.
The stream will be available tomorrow 10 CEST under streamteam.fbm.htwk-leipzig.de. We look forward to our matches and hope to have you all tune in. 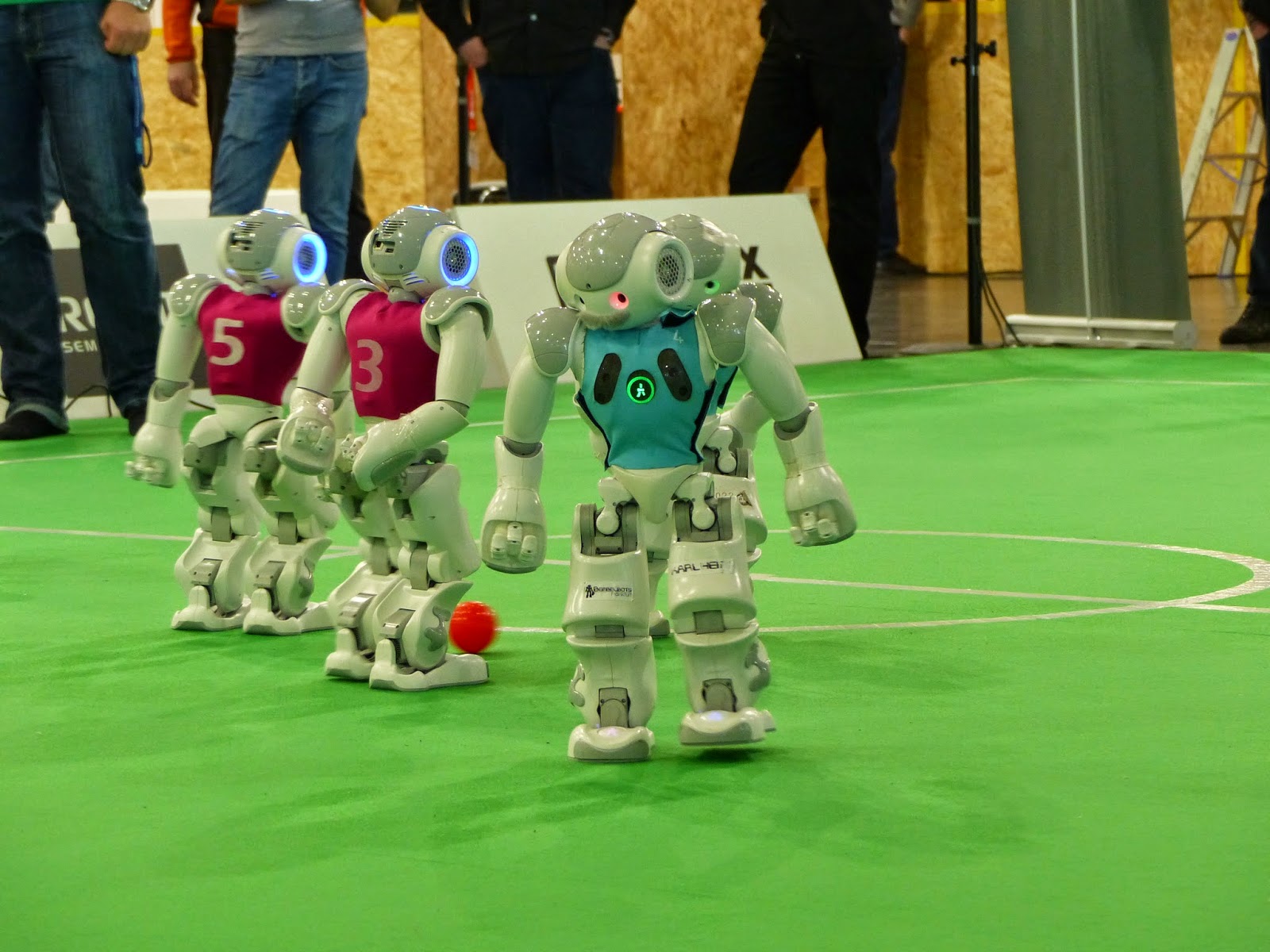 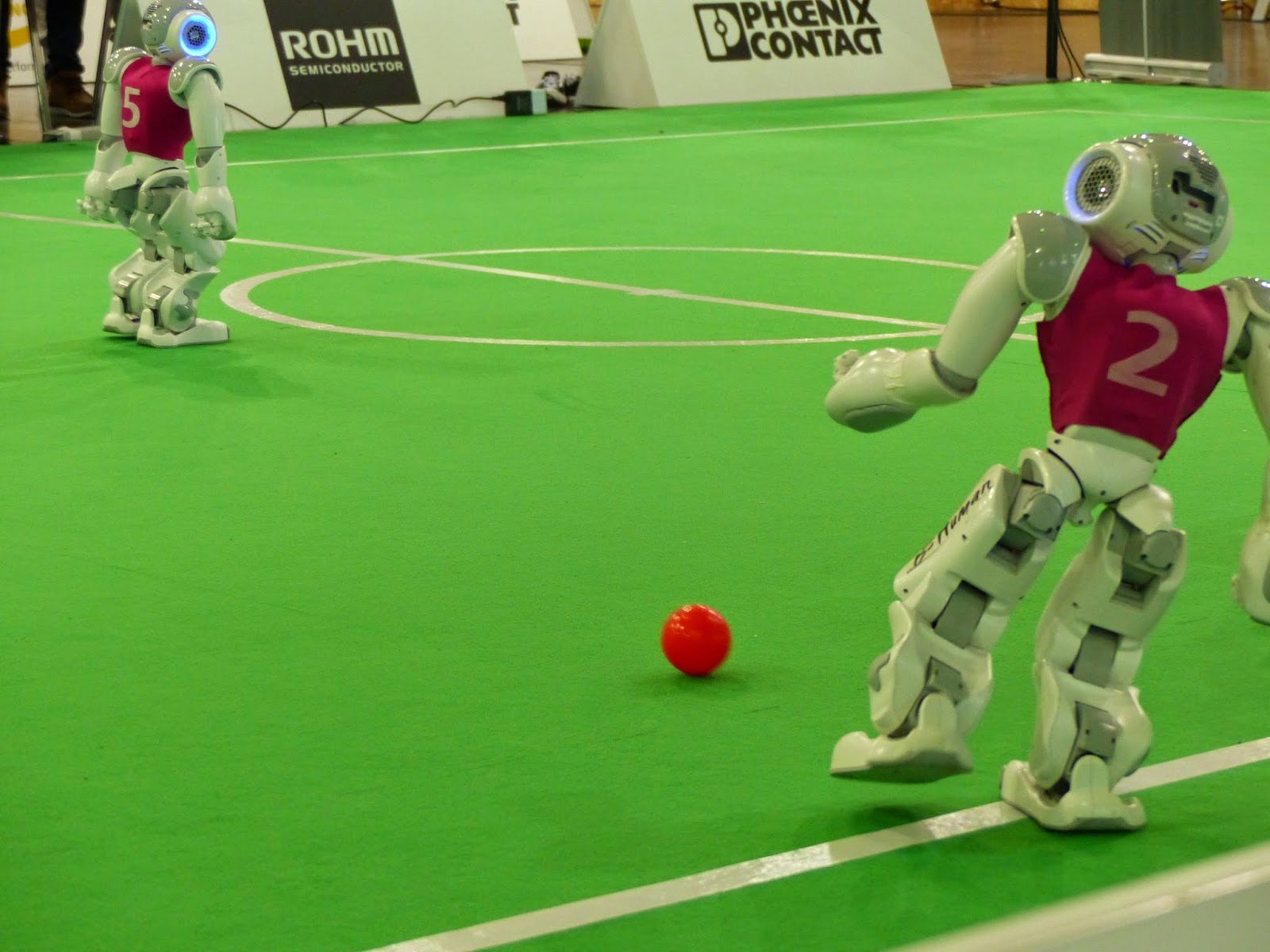 Just now our robot with the name Megamind manged to score the very first goal of this year's German Open Robotics Competition. 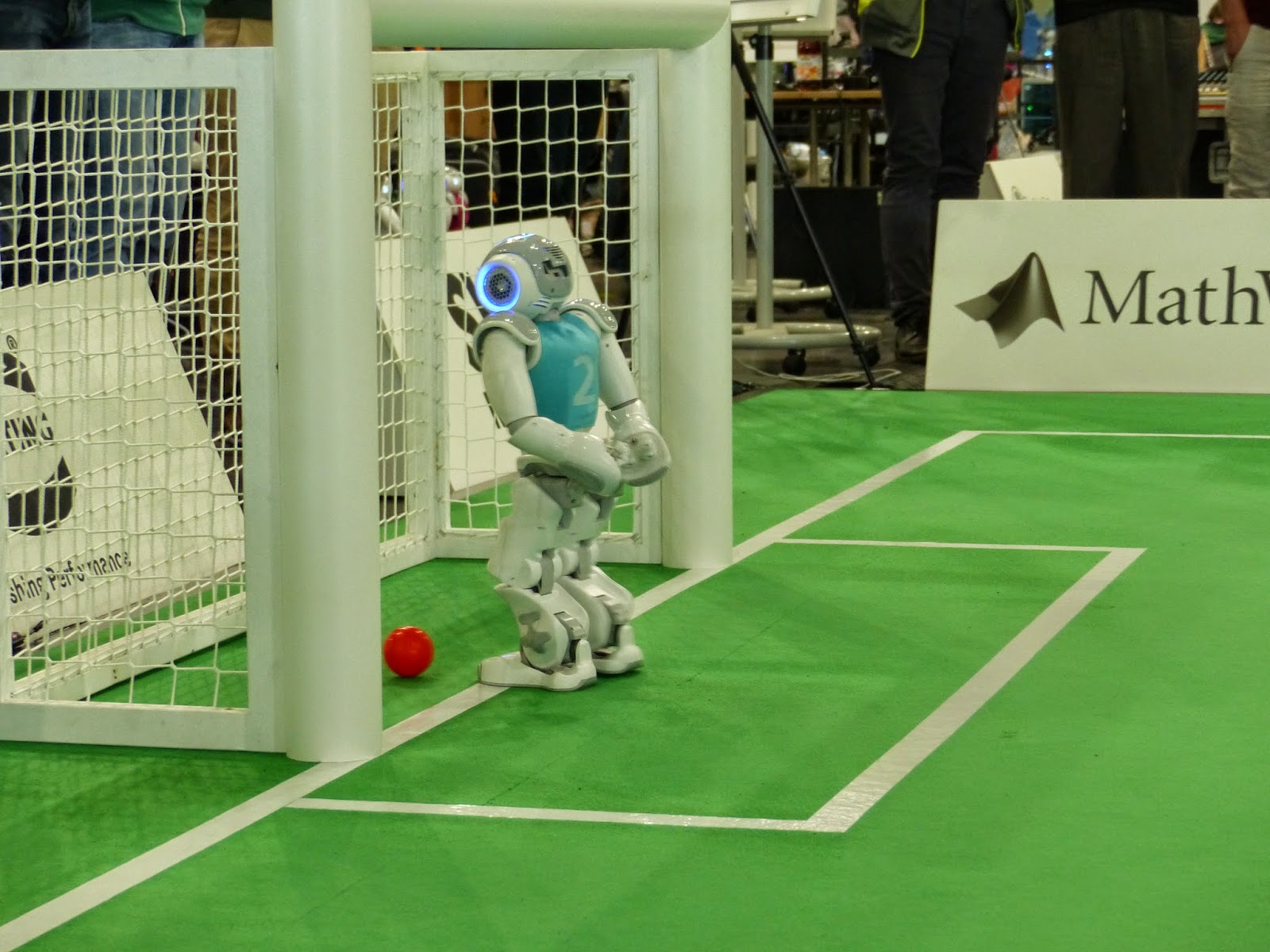 Today, drop-in games are played. In these games robots of several teams join forces to score as many points as possible while being opposed by another mixed team. Our Megamind is paired up with robots from the teams Bembelbots, HULKS and SPURT. Together they managed to outplay their opponents. In the first half of the first drop-in games, Megamind managed to score two goals in total supported by the other robots.
um 17:38 No comments:

The schedule for the German Open main competition and the additional Drop-In challenge has been released. The first Drop-In games start today at 17:00 CEST. Tomorrows Drop-In starts at 9:00 CEST, before the match between us and the team HULKS from Hamburg will kick off the tournament.
Check this page for the full schedule and updates on the results.

During the day we accomplished some small, but very important tasks. The crosses which symbolize the penalty points are now actual crosses and the borderline of the field is covered in black tape.

The finalized field was already used by Berlin United and Nao-Devils Dortmund for a quick test match.

We arrived in Magdeburg some hours ago for the 2 setup days prior to the German Open. The trip went smoothly and we were already able to get some work done as well as meeting old friends. The Iran Open 2015 ended with a long closing ceremony yesterday evening. After many Iranian politicians and scientists had given speeches, we were awarded the first place in Standard Platform League Soccer - accompanied by the cheering audience.

We are now looking forward to two more, hopefully eventful, days on which we hope to visits at least some of the promising attractions of Tehran. 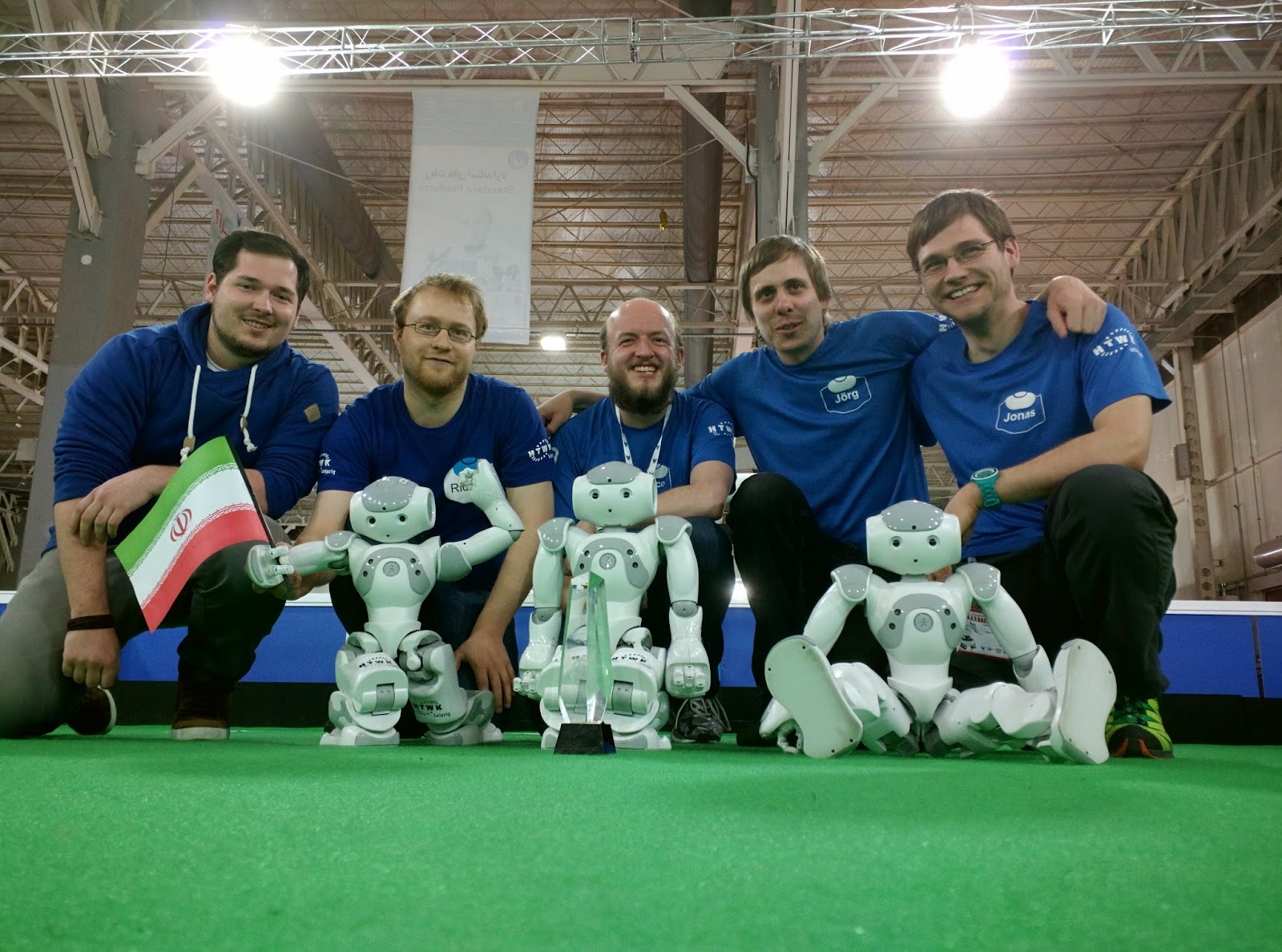 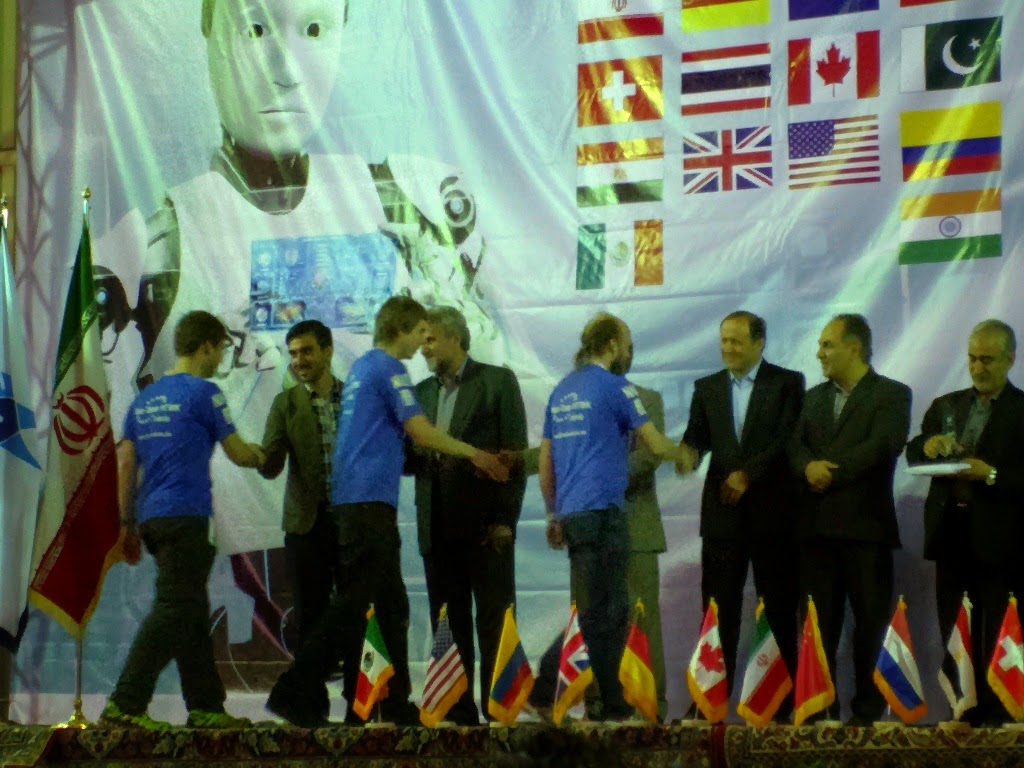 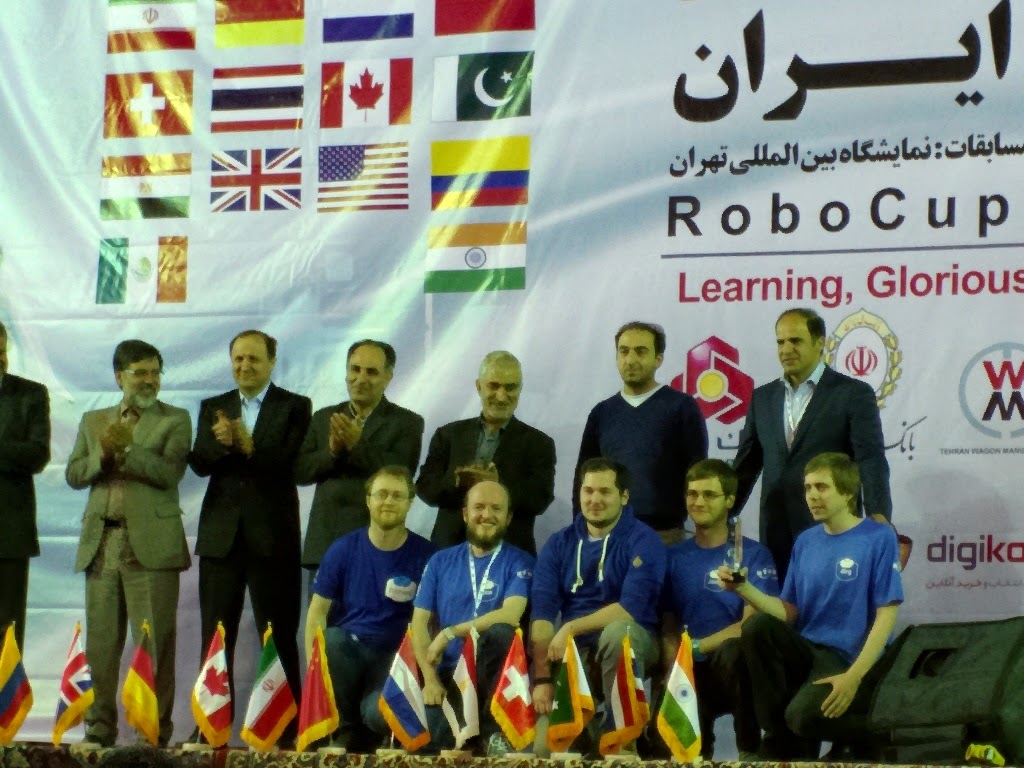 It has been an exciting and surprising match against the former champion MRL from Tehran. But the hard work and sleepless nights during the last days finally paid off.
Our striker took the first chance right after the kick-off and made his way through the Iranian defence of three robots in an instant.
In the end of the first half MRL seemed to catch up as their striker gained the ball and came dangerously close to our goal. Luckily, our defence cleared the ball, brought the ball back into the opponent's half of the field where MRL eventually scored an own goal.
The second half started with a goal for our team. Soon after, our defence saved us from a goal by MRL.
In the last minutes of the match, MRL managed to kick the ball into the far right corner of our goal where our goalkeeper wasn't able to catch it.
The match ended with a satisfying final score of 3:1. 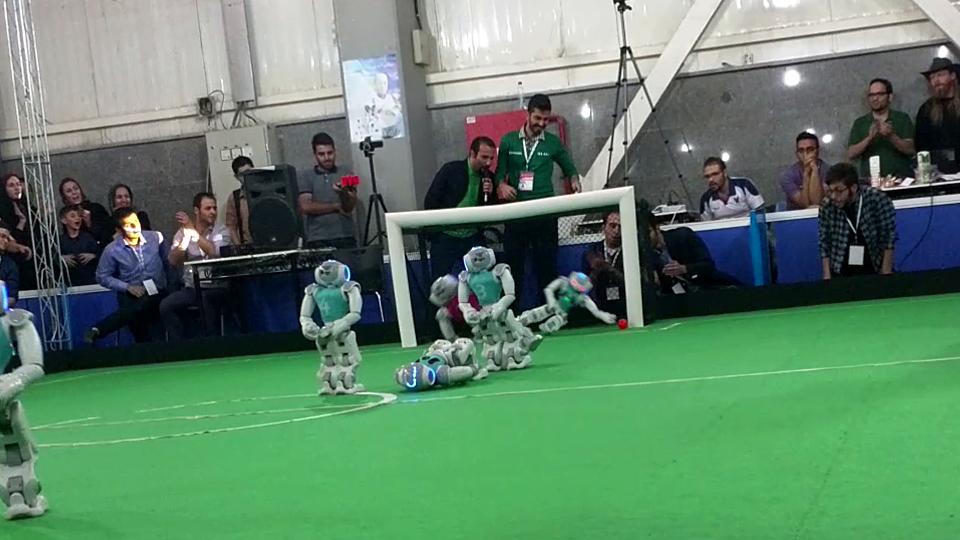 MRL's goal in the last quarter of the match. 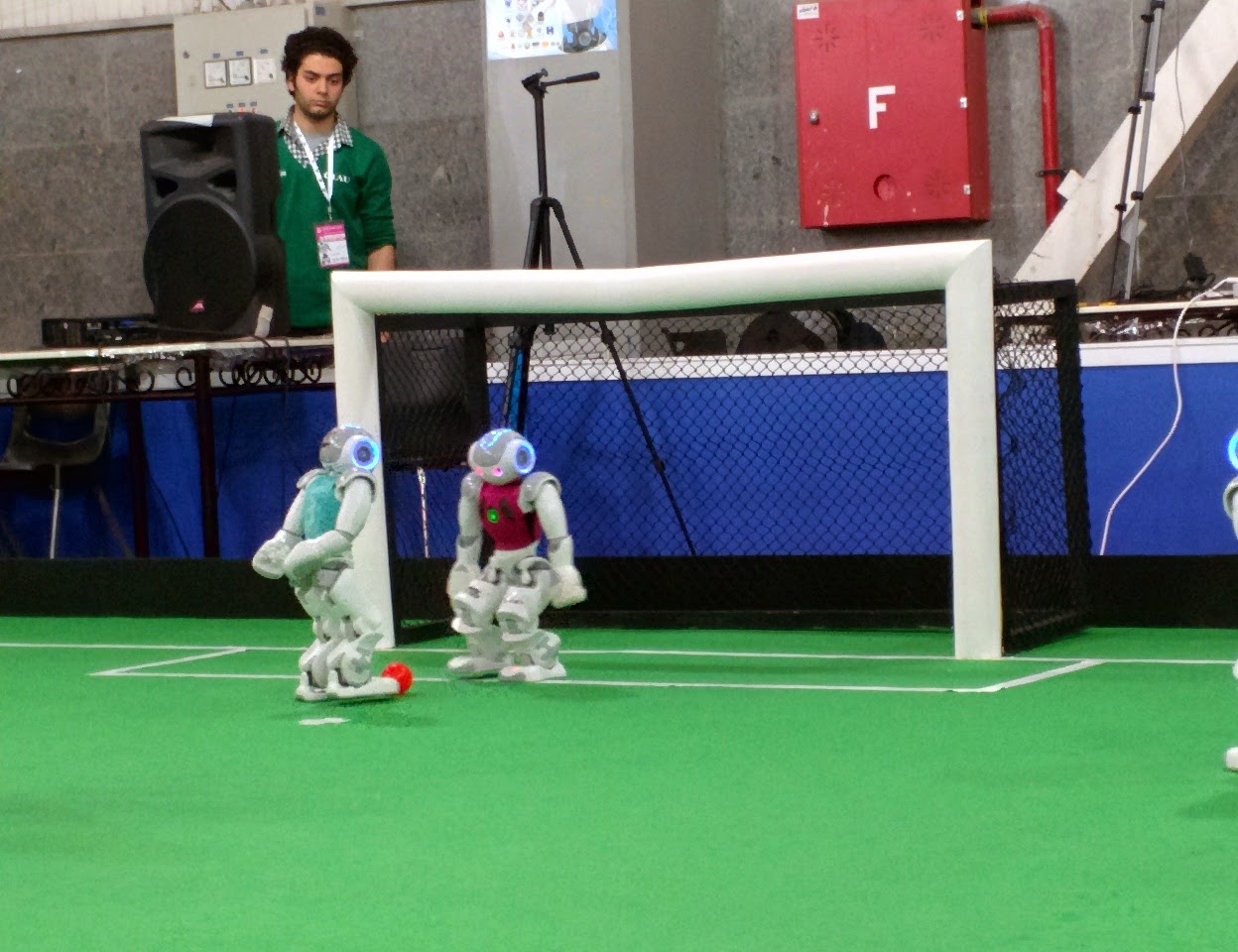 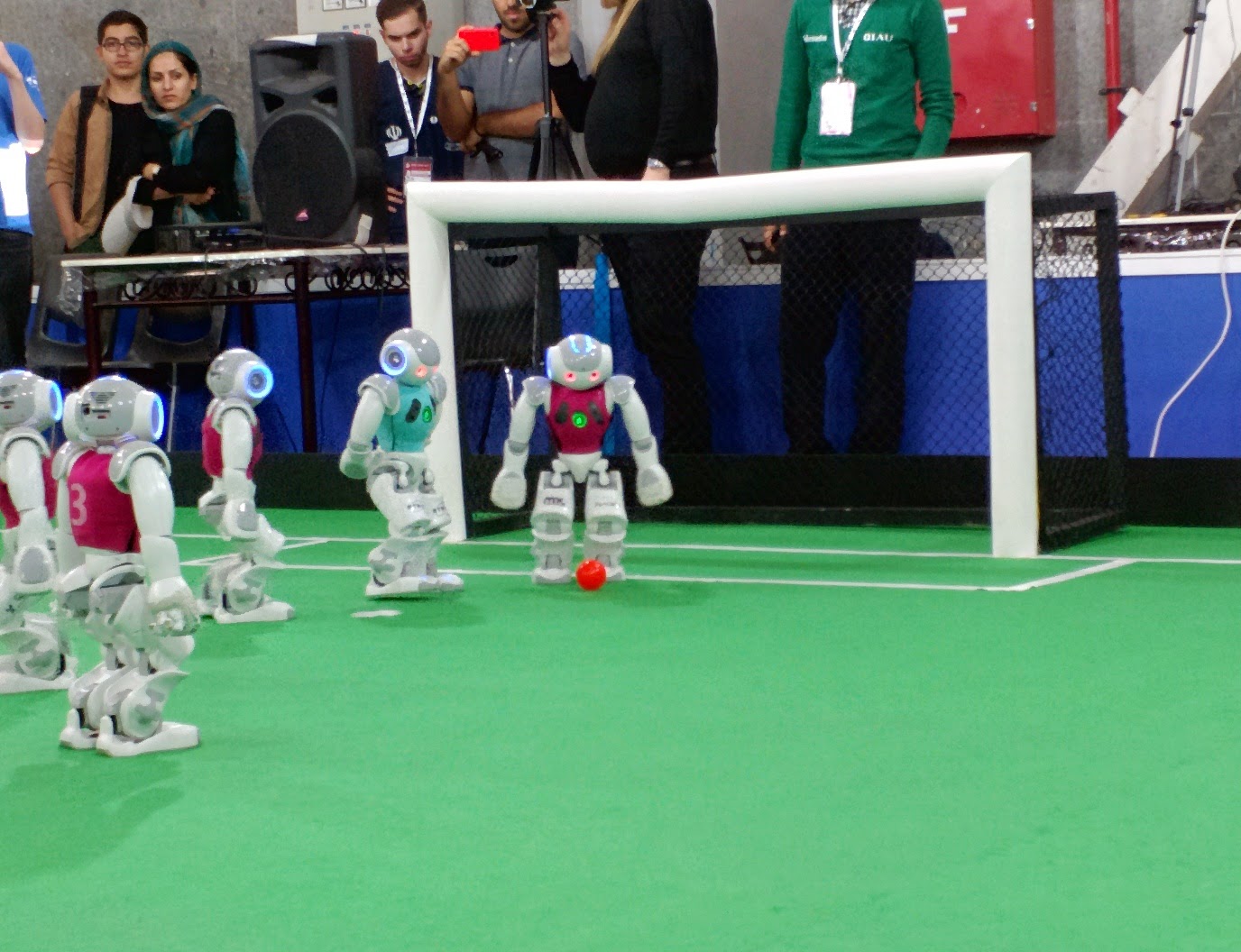 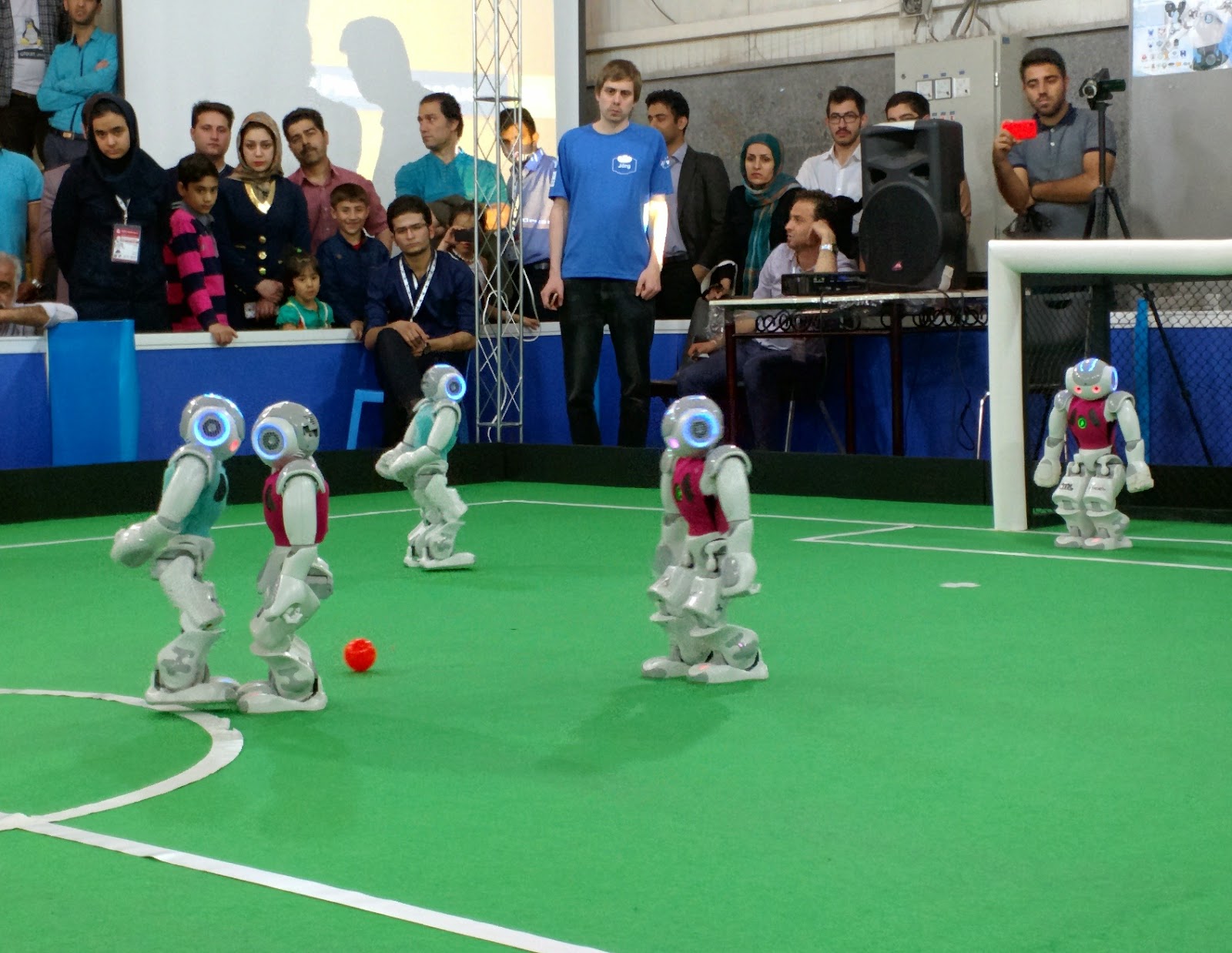 We started the day with a 0:7 victory against Z-Knipsers from Zurich. We managed to score many goals although we were still facing some minor bugs. But fortunately, the new features introduced during the competition outweighed the outstanding issues.

We are now preparing the robots for the final match against MRL at 13:30 IRDT. 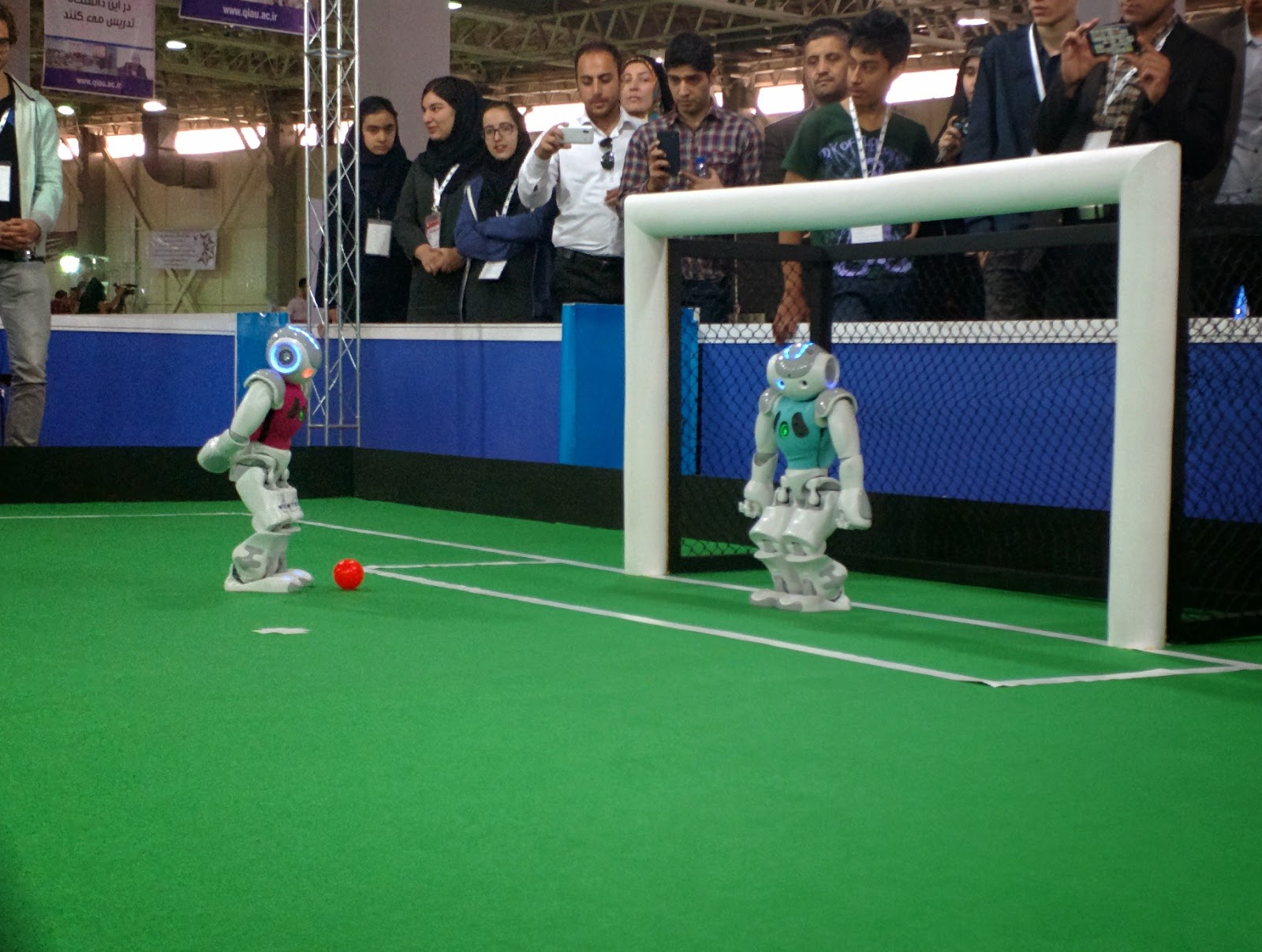 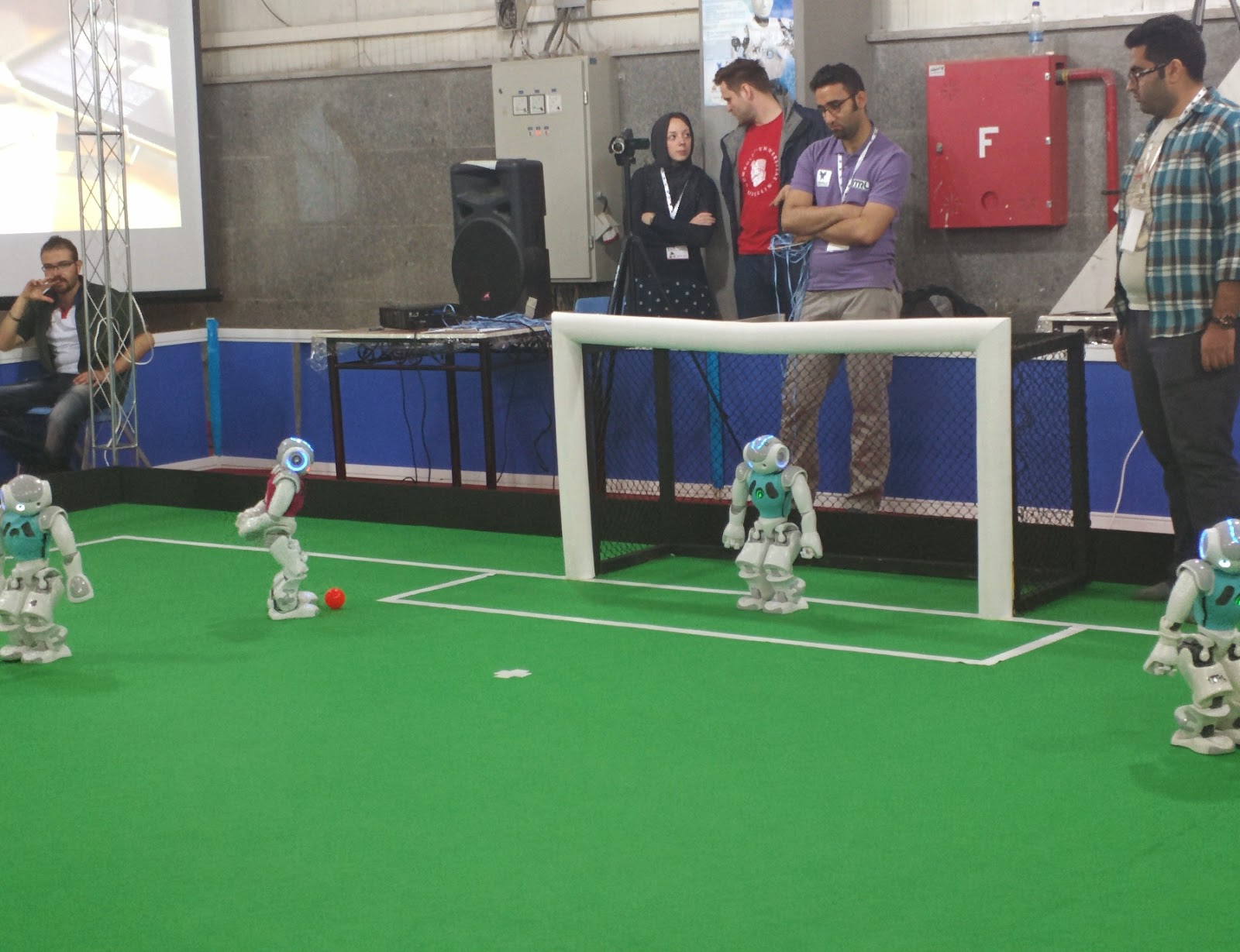 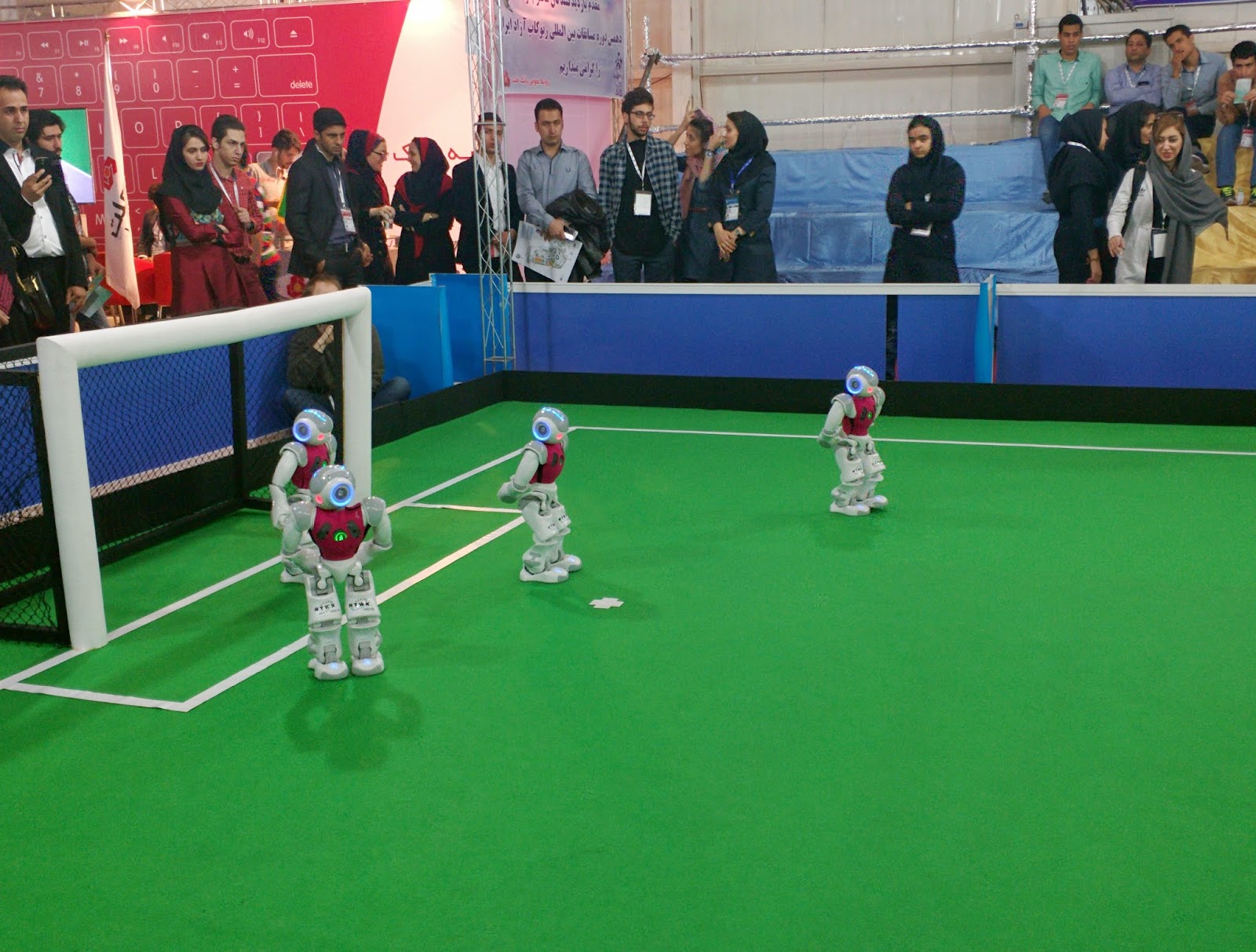