On Monday the 21st of September, our University (HTWK Leipzig :D) joined a partnership with several local companies. We are glad to announce that one of our long term sponsors, S&P, is part of the joint cooperation. We were invited to celebrate this partnership together with officials of HTWK Leipzig and S&P. During the celebtation we presented Ursula to S&P. There she will now be taken care of to be an avatar of not only the cooperation between team HTWK Robots and S&P, but the HTWK in general. 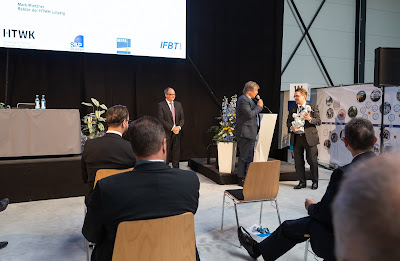 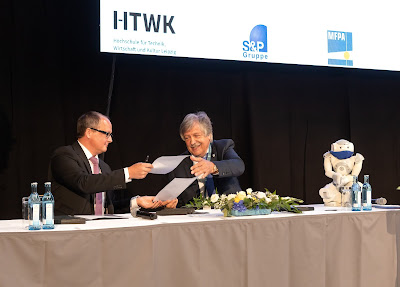 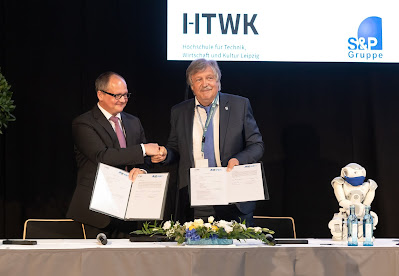 We were glad to be at the ZCOM Zuse-Computer-Museum this weekend to entertain the people that showed up to celebrate the 25th anniversary of the museum. Some impression from our field: 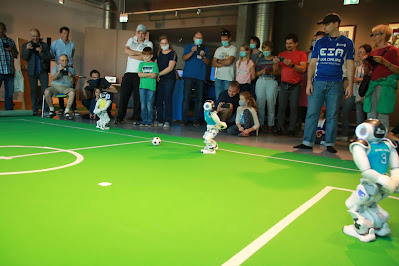 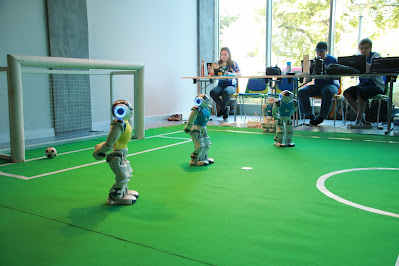 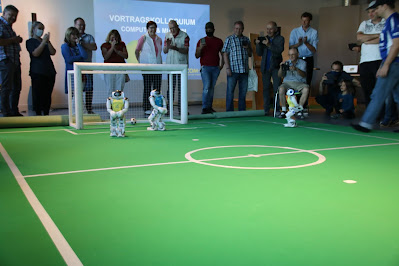 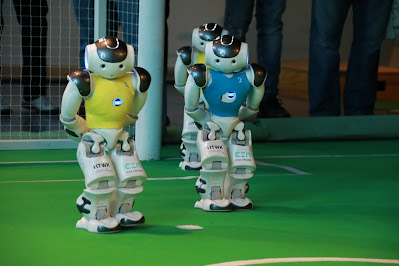 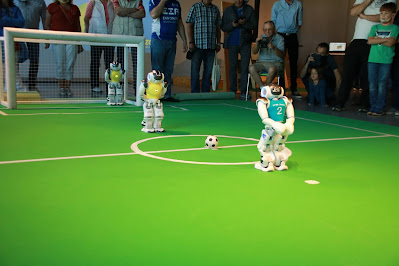 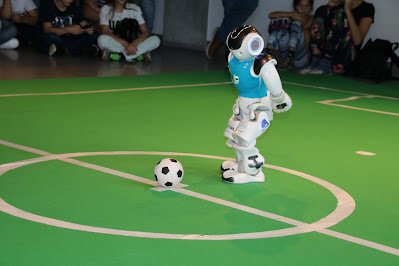 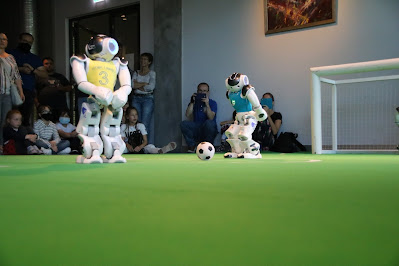 The team is assembled for tomorrows "Festwochenende" at the ZCOM Zuse-Computer-Museum. We are looking forward to show what contemporary computer science is able to do.

We are happy to announce our new main sponsor Relaxdays. Relaxdays is a growing company from Halle (Saale) and expanded to a shiny new office in the Leipzig city center in the last weeks. We are looking forward to an active and engaging collaboration. A special thanks goes to our teammate and Relaxdays employee Caro for initiating the contact. 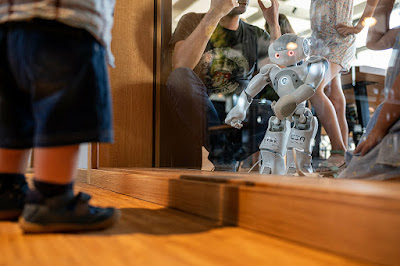 No tomfoolery allowed! Children are present?

This weekend we host our annual introductory course for the young and upcoming students of our university, HTWK Leizpig. We offer the visitors the chance to experience a small piece of RoboCup. Trying out the Robots. Working with our robotics into course. Learning exciting skills. 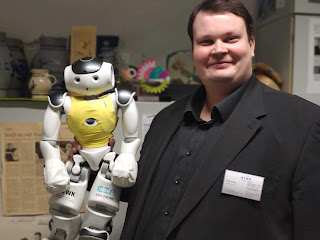 For such a serious occasion we are all professionals of course. Dressed well and addressing each other with high regard. Surely no silly jokes at all are being exchanged for danger of tainting the young students’ minds.
um 16:16 No comments:

It's the last day at RoHOW 2019 in Hamburg. We arranged a second testgame against Team Bembelbots from Frankfurt. We won 3:0, and our friendship was not bothered by this. We are still happy to share the same desk at the team area.

After three very nice days, with very nice people, we say thank you to the Team HULKs for the organization, the friendly atmosphere and of course for the food and drinks. 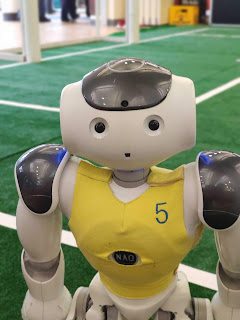 Today we met with our friends and strongest competitors: Team B-Human. They wear very cool T-shirts. I don't know what happend to mine. 😁 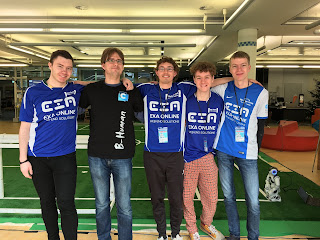 I visited two self hosted talks here at RoHOW. The first discussed ball detection using neural networks and the other discussed behavior engineering. At the moment, neural networks for image recognition and image segmentation are commonly used on the Nao hardware. The Bit Bots from the Robocup Humanoid Kid-Size League presented a more debuggable strategy framework. Their paper is on the roadway to being published. 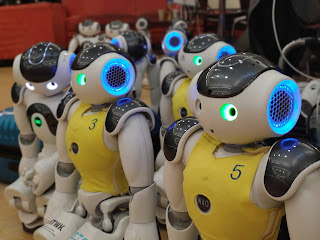 Later during the day, we arranged a testgame with B-Human on the new field. After falling behind 0:1, we managed a achive 1:1 tie at the end. Our localization and behavior worked surprisingly well with the new dimensions of the penalty area and the position of the penalty spot. 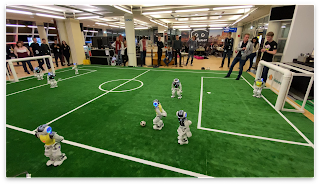 Today we are visiting the RoHOW 2019 and have arrived in Hamburg at the TUHH (Technical University of Hamburg). After a friendly welcome of the other teams we prepared ourselves for the workshops and test games during the next two days. For the field, the new measurements are used. So we tested our localization. Luckily everything worked fine. We hope for exciting games tomorrow. 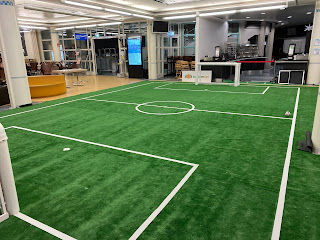 On tuesday, the 19. of  Nov. we presented our robots at a great event aimed at popularizing and teaching robotics to children. The Hftl in Leizpig was happy to welcome out Nao Robots. We were visited by pupils from grade three to grade ten and had a lot of fun. We presented videos from our latest championship and explained how our robots work, how the robots recognize position of the ball and how they decide to pass the ball instead of shooting towards the goal. The chances to control the robot on their own was very popluar with all the schoolkids. In the end the kids realized that scoring a goal isn't as easy as it looks, even with the advantages that the human eye offers. Robots playing soccer autonomously were as impressive for the children as they were for their parents.  Films with robots taking over the world were also broght up by some of the older children. But for now, we don't plan to implement that feature. ;)
um 14:02 No comments:

That's all from us. Tobias, Stefan, Caro, Marvin and Thomas will use the day tomorrow to explore ancient Rome. We will head back home on Tuesday. Have fun and see you soon :-D

With the Maker Faire concluding the award ceremony was in order. In accordance with the maker spirit permeating the halls the trophies for all robot teams were artisanally crafted at the venue. 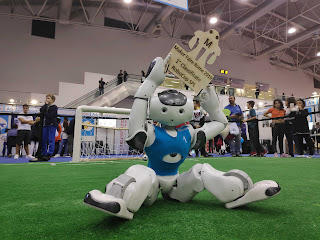 We are happy to conclude our time at Maker Faire Rome and soon will carry out 1st place trophy home. We thank team NomadZ from Zürich and team SPQR from Rome for the great games.
um 18:18 No comments:

Happy children all around

The exhibition continues to be a delight. The Robot Teams enjoy the venue as much as the young visitors do. Every game the Soccer Robots are cheered on from all sides.

With the day coming to a close we just finished the exhibition shootout. All teams were happy to show off their Penalty Shootout Skills.

At the moment we are preparing for the finals at 17 o'clock. Rome turned out to be a great place for a small fall tournament with local RoboCup Teams.
um 16:41 No comments: 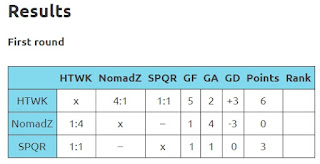 Here is our second game of the competition against Team NomadZ. The audience was absolutely thrilled and cheered us on... "H T W K... H T W K"... cool! We are very satisfied with the result 4:1.
um 14:57 No comments:

The first game on the event was very exciting, because there were still some heavy problems with the wifi.

Playing Robot Soccer in Rome means teams SPQR feels at home. Team SQPR is based at Sapienza Università di Roma and was our first opponent. 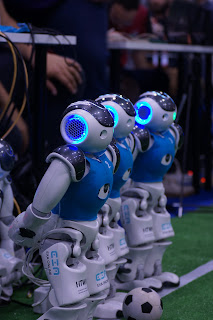 The first half went well for us and ended with one goal scored for us. Team SQPR caught up to us in the second half and the match ended 1:1. 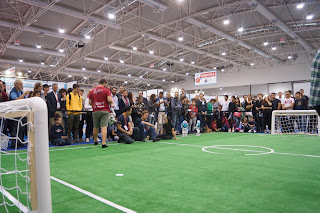 The sidelines were crowded with fair visitors when the penalty shootout started. Courious about the eventual winner people watched robots from both teams taking shots in turn. Team SPQR had problems recognizing the ball during the shootout. Resulting in Nao-Team HTWK winning 3:1. 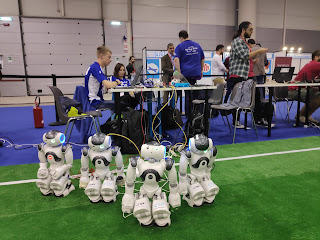 This evening we did some communicational team building, because the last time we had meet is a few months ago. Therefore we used a multiplayer game which requires the communication between two or more people.

This weekend we were invited to visit the Maker Faire Exhibition in Rome. Compared to recent RoboCup World Championships the city of Rome is a short trip for us. Nevertheless, the journey was quite perilous. Due to problems with trains one of our human members nearly missed their flight. In the end our last team member arrived at the plane just before the cabin door was about to close. With all aboard Rome was reached in the end. 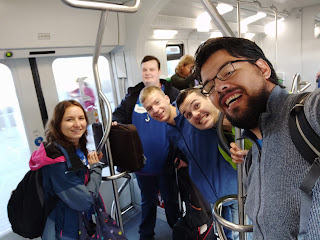 Last but not least here are some impressions of the presentation ceremony. And some more pictures you have not seen yet. 😁
Thank you everyone for being with us during the RoboCup 2019 adventure. 💖 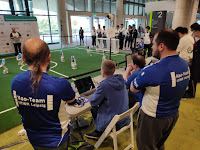 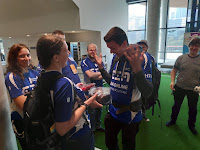 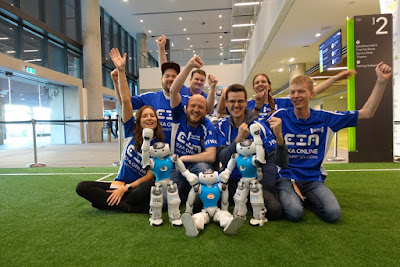 After the the Champions Cup finals, there was still a match left for us and our friends BembelBots. The Mixed-Team finals! Team Team Team vs. B&B (B-Human & Berlin United). Both teams managed to achieve the same match score in the Mixed Team group phase.

All in all was this match very even. 20 Minutes game-play ended up in a 0:0 score. So a Mixed-Team penalty shootout was needed to decide this game. Unfortunately even the shootout ended in a draw 2:2. This case kind of broke the rule book.. 😅 So the referees and the teams decided to do a "Sudden Death" shootout (with no limitation).
We decided to finish this game as a team, so we prepared the goal keeper to be from Bembelbots and a kicker from us. Sadly Team B&B was not brave enough to finish this as a team too and decided to just pick B-Human players (the new champion 2019). So overall we lost this game with a final score of 2:3.

Nevertheless we are very happy to be a part of Team Team Team. We had so much fun. So big thanks for BembelBots 😙💖💪 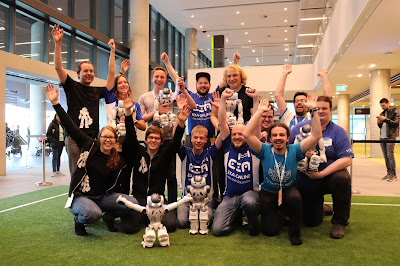